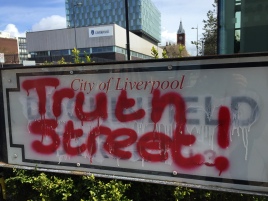 This is a truly brilliant piece of street art. It’s a response to the Hillsborough inquest jury’s definitive judgement that the 96 were unlawfully killed. The street sign is located In Liverpool, just off Brownlow Hill (L3 5RB) by the entrance to the John Lennon art school. At first, I assumed that’s why the site had been chosen. It was only when I knelt down to take the photograph and was able to look more closely that I saw the original name was Duckinfield Street. Duckenfield, of course, was the name of the Sheffield police  commander in charge of the game on the day, David Duckenfield , the man who began to spin the web of lies that it has taken twenty-seven years to eradicate. And whilst Duckenfield did eventually come clean it wasn’t without a further desperate attempt to besmirch the innocent causing further grief to the families. We now wait to hear whether he will face charges for perjury.

Apart from the highly appropriate choice of site, what marks this out is the way the name Duckinfield has been whitewashed out, as if in metaphorical response to the cover-up of the truth, manufactured in a cynical collusion between the police, media and Westminster, a cover-up that went ‘all the way to the top’, as the Shadow Home Secretary Andy Burnham pointed out in his powerful and moving statement in the House of Commons on April 27. Street signs, of course, are typically black and white, which is the very emblem of the clear-cut truth, but in this case, the truth turned out to be red. Blood red.