Liverpool Football Club took a bold and unprecedented step in banning journalists from the Sun newspaper from its Anfield stadium and Melwood training ground, following requests by, amongst others, the wittily named campaign group Total Eclipse of the S*n  and discussions with representatives of the families and survivors of the Hillsborough disaster. (NB, supporters of the boycott do not spell out the full name of the newspaper and I will respect this strategy in the remainder of this article.)

The boycott began after the newspaper ran an infamous and discredited front page blaming the fans for the deaths just days after the disaster: 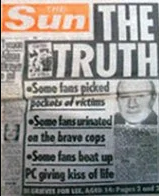 A full account of the people of Liverpool’s twenty-seven year boycott of the S*n, following its scandalous misrepresentation of the events of April 15 1989 that resulted in the deaths of 96 Liverpool fans, need look no further than this article in The Liverpool Echo, but in this piece I want to focus on one aspect of the campaign, and that is the fans’ use of the linguistic landscape through their use of banners, posters and social media to get their message across.

Liverpool fans have a long tradition of using flags and banners to go beyond merely supporting the team to deal with much broader issues affecting the club and its traditions as well as more overtly political campaigns. Perhaps only Celtic’s Green Brigade fans have a similarly activist strain running through their flags and it is no coincidence that they too have used them to express solidarity with the Hillsborough justice campaign.

In my previous research, for example, I have looked at how fans and activists used flags, posters and social media to successfully campaign against the previous American owners of the club, Tom Hicks and George Gillett, as in this hoarding:

This ‘Not Welcome Here’ campaign, was spearheaded by the Liverpool supporter’s union the Spirit of Shankly and was followed up with a brilliantly simple action whereby they mobilised Liverpool’s global fan base to take photos of themselves holding up PDFs, including this one taken outside current owners’, Fenway Sports Group’s Boston Red Sox stadium: 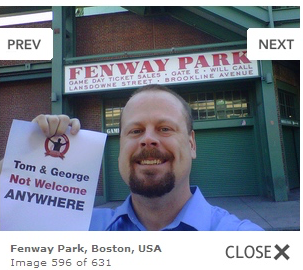 Using similar tactics, Total Eclipse of the S*n and fellow campaigning group Shun the S*n have achieved remarkable success in a very short time. it has been running for less than nine months as campaigners had to wait for the Hillsborough Inquest verdicts so as not to risk prejudicing the outcomes. So how have they done it? Largely through its canny deployment of various semiotic resources in public and virtual spaces. It would be overly simplistic to put the decision of the club’s owners to ban the S*n from their premises down to social media activism (as we saw with analyses of its role in the Arab Spring), nevertheless, there can be little doubt that ‘prosumer’ activism is playing its part as consumers of social media increasingly turn producers in what is described by professor of communication Henry Jenkins as ‘convergence culture’. Whilst isolated, genre-breaking, interventions such as this plaque placed on a park bench near the Hillsborough Memorial in the centre of the city,

or individual 140-character postings on Twitter may not constitute a Habermasian ‘public sphere’, they certainly reflect what he termed the ‘lifeworld’, the immediate milieu, of the ordinary citizens who made them. Still, it remains tempting to regard the football field as a type of ‘agora’ and I would argue that their dynamic movement through social media constitutes the sort of dialogue Habermas believes essential to the democratic process. In this sense, Habermas might also view positively the campaigners’ response to an attempt by the S*n (which can be seen as part of what he terms ‘the system’- the marketplace and state apparatus). In June 2014, the newspaper sought to use the centenary of the First World War to market the paper by posting out free copies of a special commemorative edition to every household in the country. This was met by another form of the ‘not welcome here’ protest when campaigners encouraged people to leave messages for their postman asking them not to deliver it and to disseminate copies of their messages on social media, as in these examples, which gradually emerged as a sort of meme: 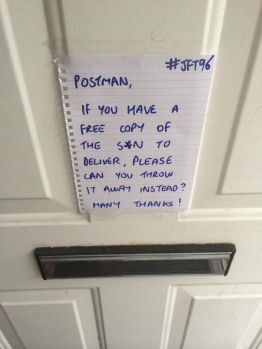 As a result of this and other similarly language-based interventions, it is estimated that sales of The S*n have collapsed by over 40% on Merseyside, costing the paper an estimated £10 million a year.

The campaign was recently stepped up a gear by shifting the focus away from encouraging individuals not to buy the paper to urging retailers not to stock it. Paul Collins, one of the founders of Total Eclipse of the S*n is keen to present the campaign not as an effort to ban the paper (the Society of Editors describing it as ‘stretching towards censorship’) but one of simple decency and awareness raising. One of the strategies they have used is another intervention in the linguistic landscape by asking sympathetic shopkeepers to display one of their ‘Not welcome here’ posters (an echo of the earlier Hicks and Gillett campaign) and in return these shops are promoted on the group’s Facebook page.

Images such as these circulate through social media and are helpful in generating further take up through retweeting. It is estimated that some 220 shops have stopped selling the newspaper, including major supermarkets such as Asda, Marks and Spencer, Morrison’s and Tesco.

The campaign has also had an impact in the political arena in and around Liverpool. A number of councils in the region have now passed motions asking retailers not to stock the newspaper and Merseytravel, who are responsible for bus, rail and travel services in the region, have also issued a letter to vendors across the Liverpool City transport network not to stock the newspaper.

In an intriguing move, Total Eclipse of the S*n have even enlisted support from taxi drivers, often regarded as more right-leaning in their politics. The group has sought sponsorship to have its campaign logo emblazoned on the sides of 96 black cabs, one for each of the victims. That’s certainly a novel and dynamic intervention in the linguistic landscape.

What the campaign has shown is how effective protests by ordinary people can be when they harness the power of the streets with reach of the tweets and the strategic deployment of language and other semiotic resources has lain at its heart. The campaign now moves to the city’s other football club, Everton, rivals on the pitch but steadfast supporters of Hillsborough families and survivors. And where will it go from here? Well, the campaigners have now asked supporters in other cities to sponsor their cab campaign so we may be about to find out just how far a taxi can take you these days.