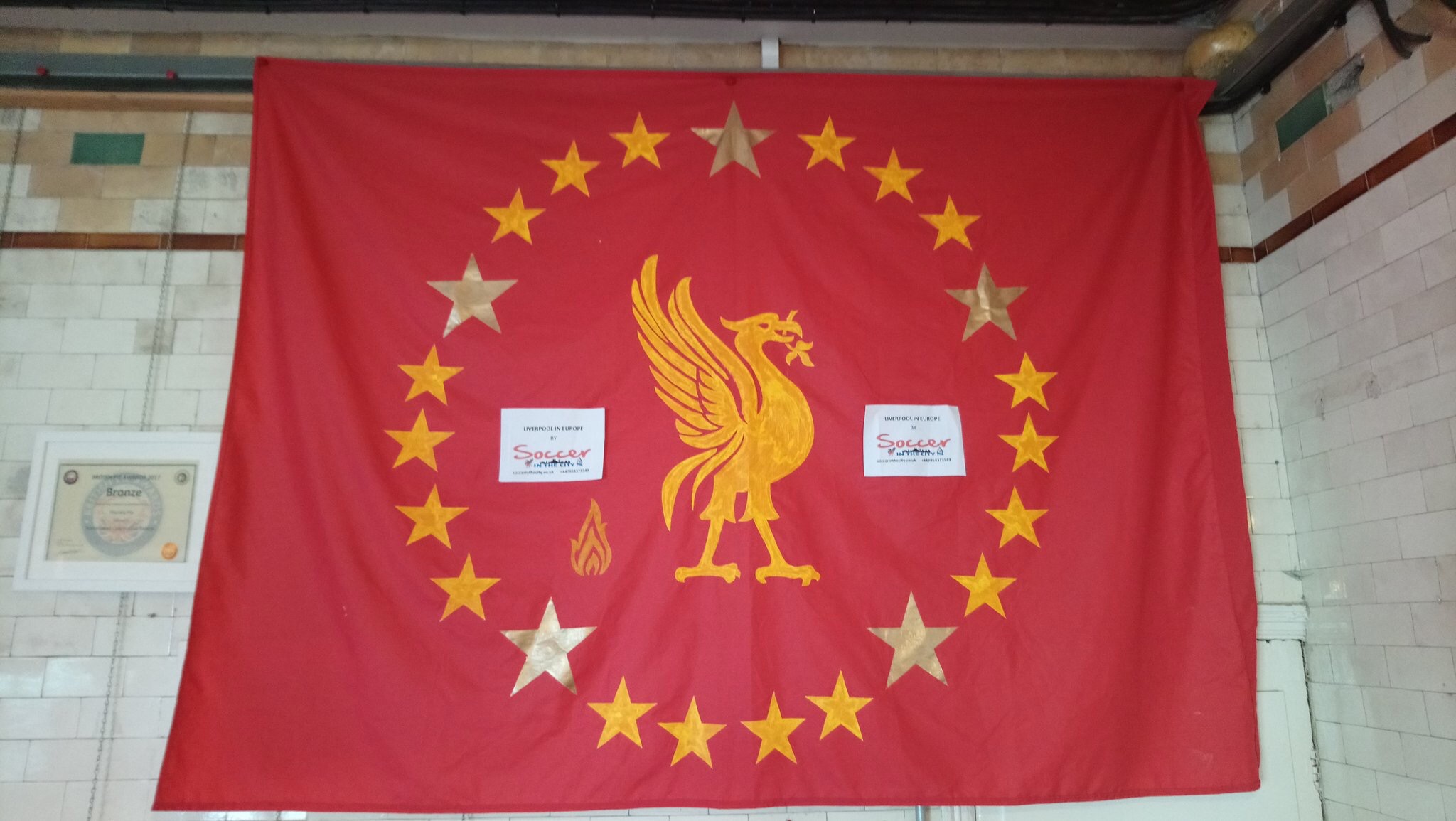 Today is the first day of the parliamentary debate about the country’s ‘plan’ for leaving the EU so it seems a good time to sing the praises of this rather wonderful flag produced by ‘Soccer in the City’ that celebrates LFC’s glorious return to European Champions’ League football. Typical Scousers, revelling in the return to the heart of Europe Europe at the very moment those Little Englanders revile it.

What I love about this flag is its playful blend of politics and football: what’s the biggest story in the U.K. at the moment? Leaving the EU. What’s the biggest story in Liverpool? Sorry Bitters, it’s Liverpool being back in Europe. This flag wittily shows its colours on both counts. Taking the European Union flag, with its blue background and yellow, stars, this flag places the stars on a red background, with five standing out to match the number of Champions League cups LFC have won.

From a linguist’s perspective — and I should remember that’s my day job – I’m also interested in the the fact that the stars are arranged in a circle, an indicator of equality, all being equi-distant, none ranked above another, whereas the Union Jack, of course, is all rigid lines and segments. So unlike most LFC banners, this one has no words on it and nor does it need any to express its message.

Politics and football deftly combined: the red for internationalist socialism as much as it is for Liverpool, proclaiming a rejection of the blue associated as much with Tory nationalism as with bitter rivals Everton. The choice of colour is, of course, inevitable being LFC’s team colour but it can also be read as an assertion of opposition to the Leavers. Whereas other supporters of Remain proudly sport the blue, this flag shows its emphatically red Scouse solidarity with European unity. The timing of the message affirms and rejoices in the fact that the team and its supporters have come home to Europe at the very moment the (narrow) majority in the country has voted to leave. (And, of course, Liverpool had a particularly large pro Remain majority in the referendum.)

Personally, I like to read this flag as a declaration of independence, maybe even an intent to secede, and to stay part of the Union, that larger, starry vision of our future right at the heart of Europe, back where LFC (and all of us) truly belong.