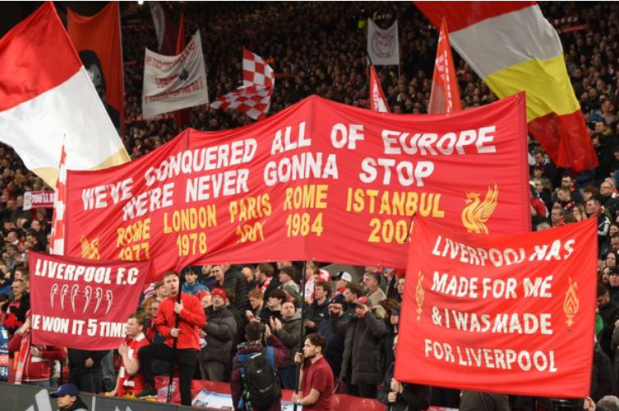 Cometh the chant, cometh the banner…

Song titles and lyrics have always been a feature on fans’ banners, from ‘Kenny’s from Heaven’, to ‘In this bright present‘ and so it’s no great surprise to see a chant that has become very popular very quickly, Allez! Allez! Allez! take its place in the pantheon of banners at last night’s Champions League quarter final against Man City, which, by the way, Liverpool won 3-0, just in case it escaped your attention. Here are the lyrics:

We’ve conquered all of Europe, we’re never gonna stop, from Paris down to Turkey, we’ve won the fucking lot. Bob Paisley and Bill Shankly, the fields of Anfield Road, we are loyal supporters, and we come from Liverpool. Allez, allez allez!

So no surprise then that the banner lists not only the dates of the 5 Champions League title wins but also where they were won. This is taken up in another banner on display last night, produced by the ever-reliable Spion Kop 1906: 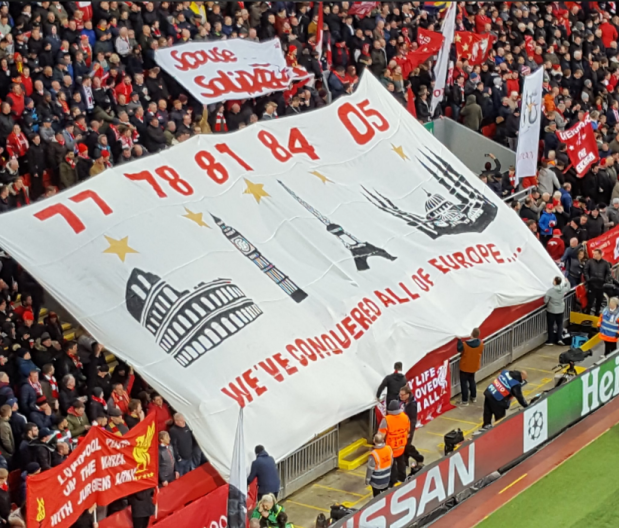 A novel aspect here is the black and white silhouettes of iconic buildings from the four cities that hosted those finals, Rome (1977, 1984), Paris (1981) London (1978) and Istanbul (2005). It’s interesting to note that the silhouettes seem to have been ordered aesthetically rather than chronologically so Rome’s Coliseum and Istanbul’s Sultan Ahmad Mosque flank London’s Big Ben and Paris’s Eiffel Tower. (I’ve no idea if the lads who designed the flag had any deeper Freudian motivations in inserting the two phallic structures between the two circular ones, but they’ve certainly produced a penetrating image.)

Both banners repeat the dates, and this is a common feature, emphasising the club’s history, reiterating significant moments so they become etched in the fans’ memories like 1066 and all that. Both also carry the first line of the chant so are brought into a kind of conversation with each other, repeating the message. On the surface it is simply a statement of past glories, but that word ‘conquered’ also suggests an ongoing status as victors so the banners are also addressed to its present moment, the quarter-final match against Manchester City (which Liverpool won 3-0, by the way) and speak to both LFC fans as a badge of pride and to Man City fans as a warning of who they are up against.

The banners speak of continuity, then, just as the song lyric does with its reminder that ‘we’re never gonna stop’. What this does is remind us that the club is its history and that there is something transcendent about it. In turn, this reminds me of the philosophical paradox of the ship of Theseus. According to Greek myth Theseus amongst other things, slew the Minotaur, was King of Athens, and the son of Poseidon. So beloved was he that after his death the Greeks decided to preserve the ship he had sailed on in his many heroic adventures. As time went by, plank by plank had to be replaced due to ageing. At some point every single plank and nail, anchor and sail had been substituted so was it still the ship of Theseus? In fact, was it even still the ship of Theseus once the first plank was replaced? So it is with football teams. Clearly, nobody who played in that first 1977 final still plays and yet we still speak of LFC as a single entity. How to resolve the paradox? Well, I’m no philosopher, but I suppose it all depends on what you think constitutes the club – the parts (players, managers, owners) or the whole of its history. To fans it is always the latter that endures and that, equally, is why football endures, so it’s not so much as this team or that team, this manager or that makes Liverpool but the endless setting sail, the conquering journeys through Europe creating the treasure trove of memory, a collective memory that belongs to no-one and everyone. Allez, allez, allez…